Talal Asad 1973 The Bedouin as a Military Force

An early essay by Asad:

“The Bedouin as a Military Force: Notes on some aspects of power relations between Nomads and Sedentaries in Historical Perspective.” in The Desert and the Sown: Nomads in the Wider Society. Ed. Cynthia Nelson. Berkeley, CA: Institute of International Studies, University of California, 1973. 61-73.

Talal Asad 1977 Review of Hassan Fathy's 'Architecture for the Poor'


Talal Asad's review of the legendary Egyptian architect Hassan Fathy: “A Village in Upper Egypt.” Gazelle Review of Literature on the Middle East (1977): 82. 1976

Architecture for the Poor:
An Experiment in Rural Egypt 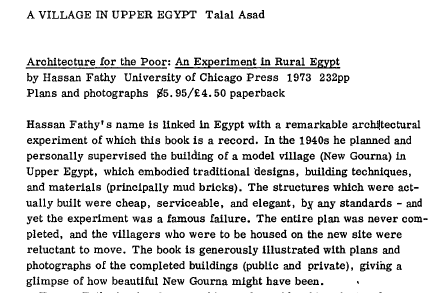 One of Asad's minor texts, penned while he was at The University of Hull, Remarks on Edward Said's Orientalism was published in 'Short Notices' section of The English Historical Review (Vol. 95, No. 376, July 1980, pp. 648) 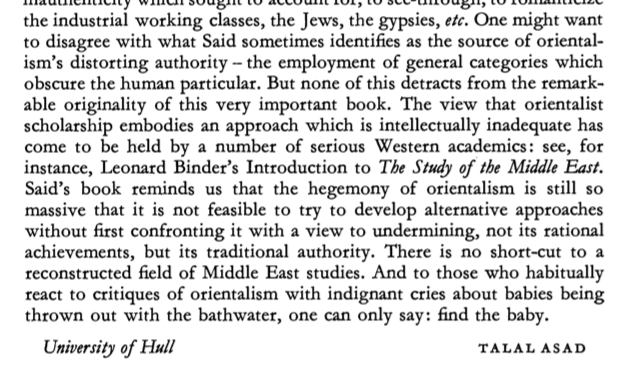 New Article: ''Remarks on Allen Feldman’s Archives of the Insensible'' (2017)

Talal Asad contributed to Social Text's online forum on Allen Feldman's Archives of the Insensible: Of War, Photopolitics, and Dead Memory (Duke UP, 2015).

Asad's response is copied below. Dossier has further contributions by Jonathan Beller and Drucilla Cornell, together with a reply by Feldman to his critiques.


p.s.1. Asad also wrote a blurb for the book at the time of its publication, here

p.s.2. There is a recent interview with Feldman on his book, conducted by this humble blogger and Asif Akhtar, available through Naked Punch.


Remarks on Allen Feldman’s
Archives of the Insensible 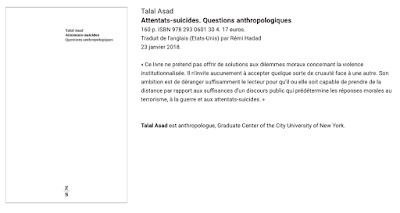 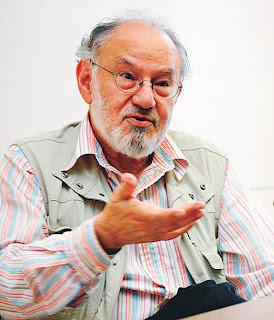 Talal Asad is Distinguished Professor Emeritus of Anthropology at the Graduate Center of the City University of New York.

For contributions, questions and other issues please email to: ''selimkarlitekin at gmail dot com''